Home > Builders Start to Look Up

Fewer write-downs and new-home order cancellations along with improved order rates are some of the most positive signs from home builders since the housing market began to roll over four years ago. 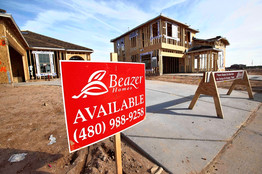 New Beazer homes, in a Feb. 2 photo, that are under construction in Gilbert, Ariz. 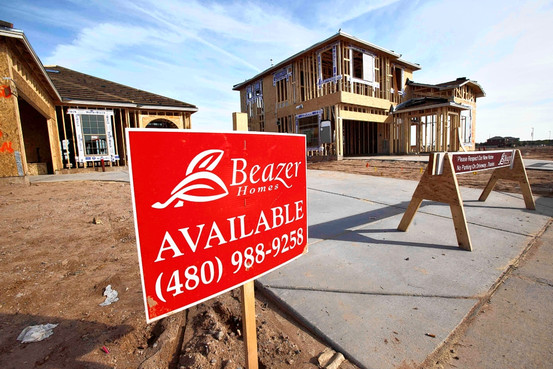 Aside from the nation’s banks, no industry was humbled by the recession quite as much as home builders. But, similar to the banks, builders got a lot of support from Uncle Sam, which has helped some recently return to profitability.

Supports such as the first-time home-buyer tax credit, longer tax-loss carry-backs as well as huge write-downs in land and inventory values, have allowed builders to, for lack of a better term, rebuild themselves. Many are leaner, and less burdened with debt, which should enable them to turn reliably profitable once the economy improves.

The 14 publicly traded home builders have written off an aggregate $33.65 billion since the first quarter of 2006 through the end of 2009’s third quarter, according to Moody’s Investors Service senior credit officer Joseph Snider.

“We cannot say that the impairment cycle is done,” Beazer Chief Financial Officer Allan Merrill said, “but we can say that improving absorption rates and firming prices are currently reducing the probability of significant additional impairments.”

The company also posted a 45% increase in new orders, and its cancellation rate fell to 26% from 38% a year ago. Pre-tax charges for inventory impairments and write-offs fell to $1.2 million, compared with $56.2 million in the year-earlier quarter.

Pending homes sales last week came in higher than expected, but any continuing improvement for the builders obviously hinges on matters largely out of their hands. And given Friday’s January jobs report, it may be some time before those matters turn in their favor.

“You have to have job growth in the economy, and there is obviously no job growth to speak of today,” D.R. Horton Chief Executive Donald Tomnitz said last week.

"Some may say realtors are a dime a dozen, well not when it comes to Jesse. When my husband and I decided to buy a home in Tahoe we spent countless hours... continued"
- Mike F Los Angeles, CA
View All

My focus is on you as our customer – your needs, your expectations, your understanding and comfort in the process. You have our promise of personal and caring service to respond quickly to your needs and requests. It is our desire that you have a positive experience with our team and develops a long term relationship, so you will always think of us when you have a real estate need...
Meet Jesse